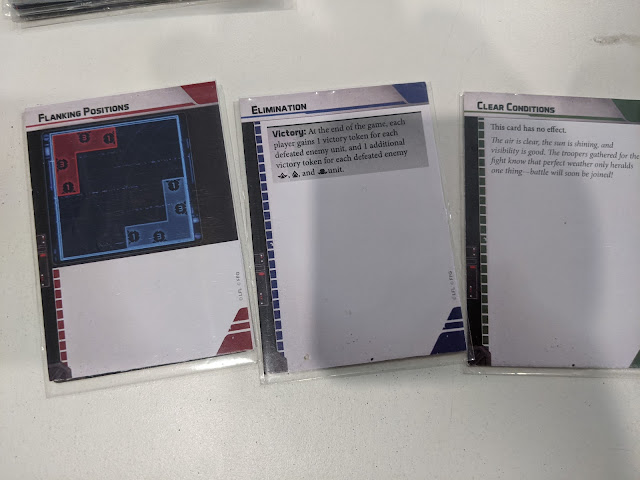 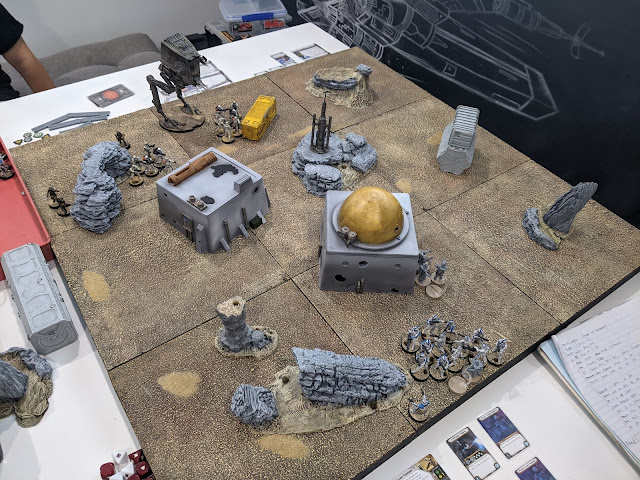 Turn 1
Assault (3 pip) vs Standing Orders (4 pip)
Aeson is only a 10 year old player so my advice for him was simply. Ensure your AT-ST has an order token every turn and focus on a single unit before moving onto the next. He placed his faceup order token onto the AT-ST and went to work shuffling most units forward into mutually supporting positions. The Clones also did the same thing setting up for next round shots. 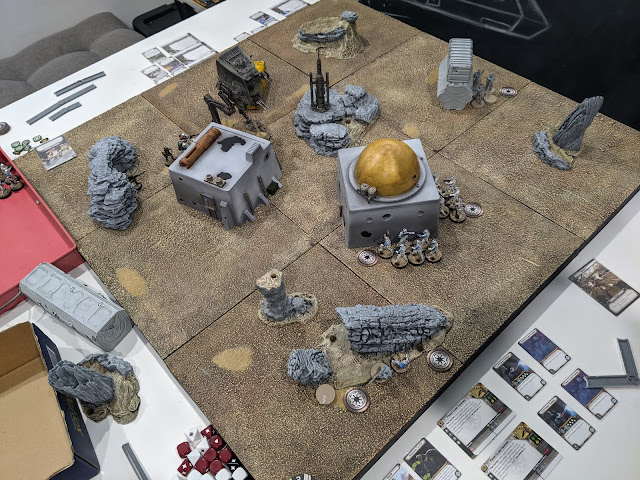 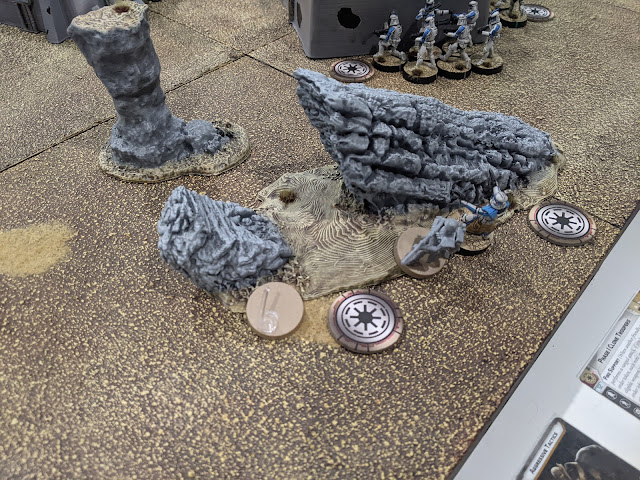 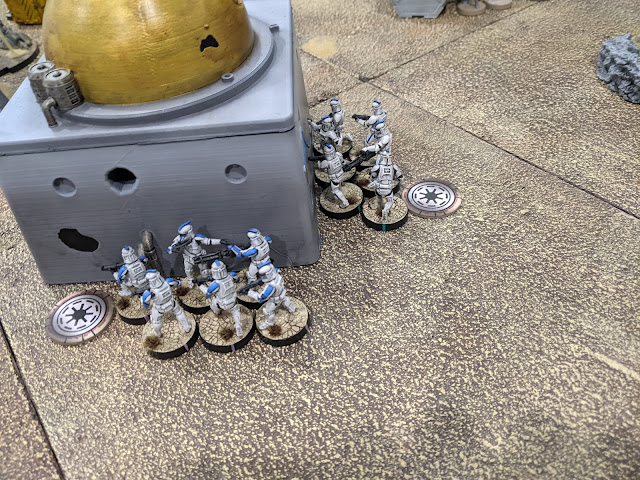 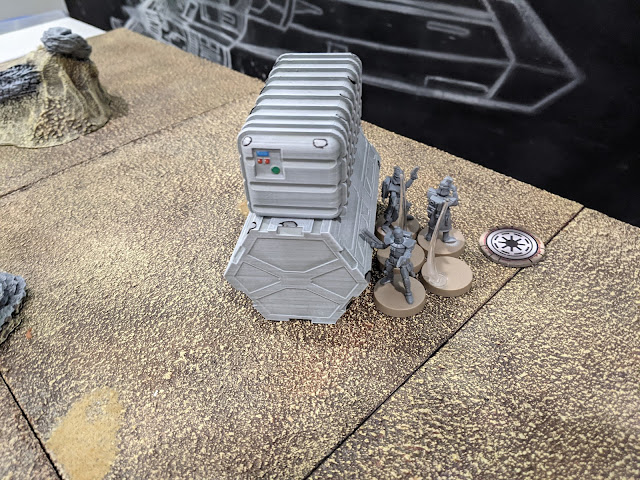 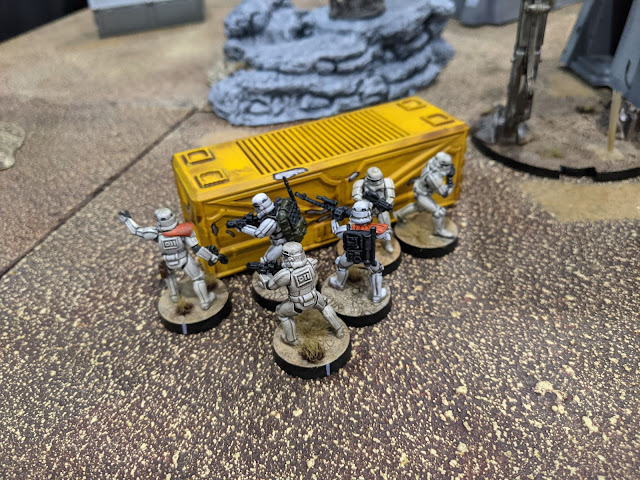 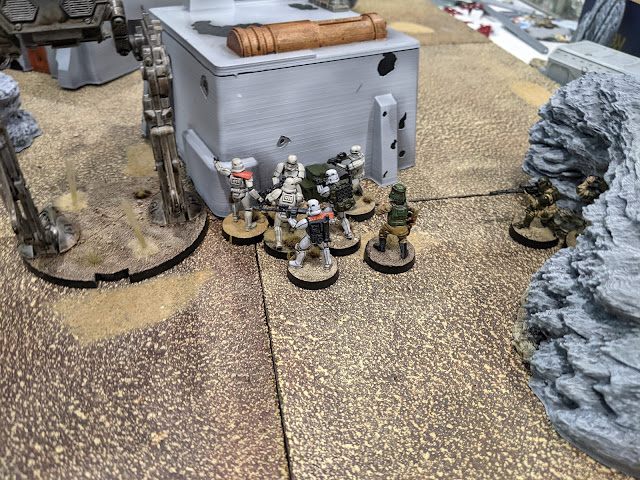 Turn 2
We're Not Programmed (3) vs Ambush (1)
Once again the AT-ST has an order token for use in the later turn. The Clones have complete activation control with only the ARC troopers going into the draw pile.
The Stormtroopers move into the open and take a dodge action and pop the Stormtrooper specialist for a surge token. Echo moves into a sniping position managing to drop one of the opposing Strike team members. Veers hands out aim actions before the ARC troopers take a double move to get into a next turn flanking position.
The second unit of Stormtroopers open fire onto nearby clones for a single suppression token only before they pour fire into the AT-ST resulting in a single wound. The second unit of clones mirrors the first with another wound and in reply the Imperial war machine kills 3 clones. 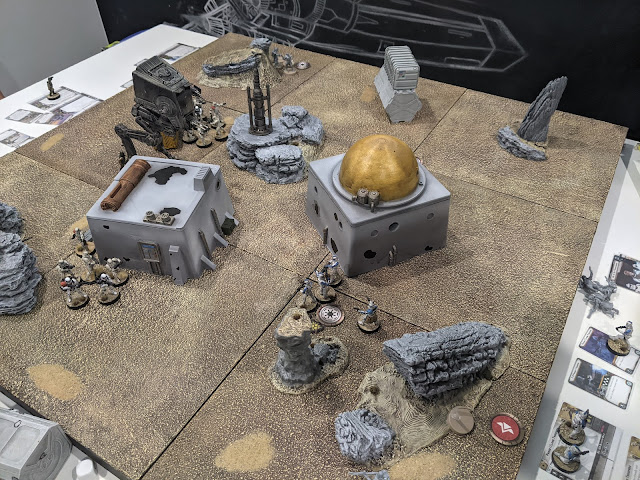 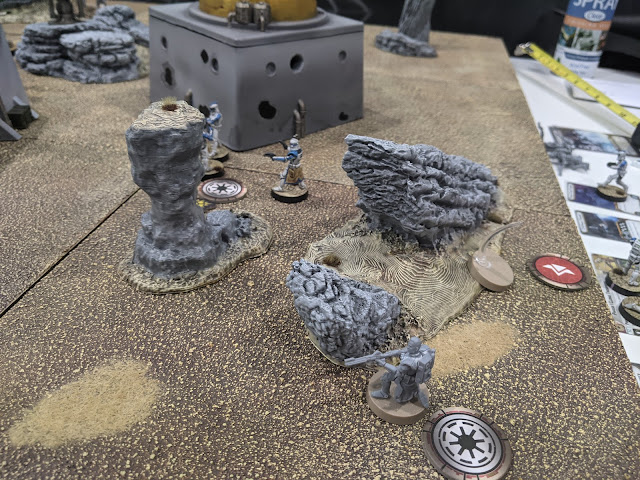 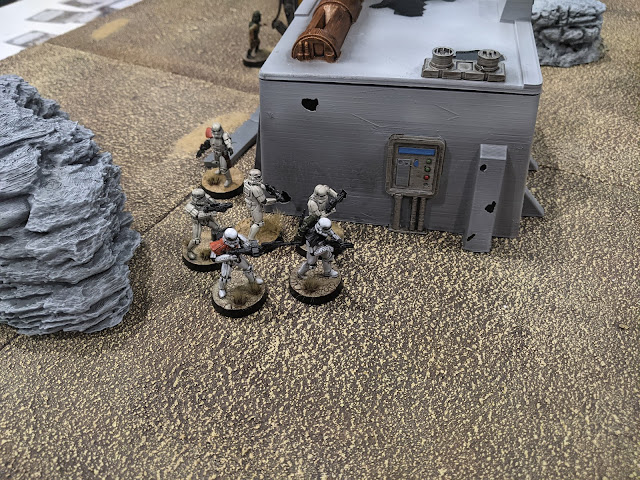 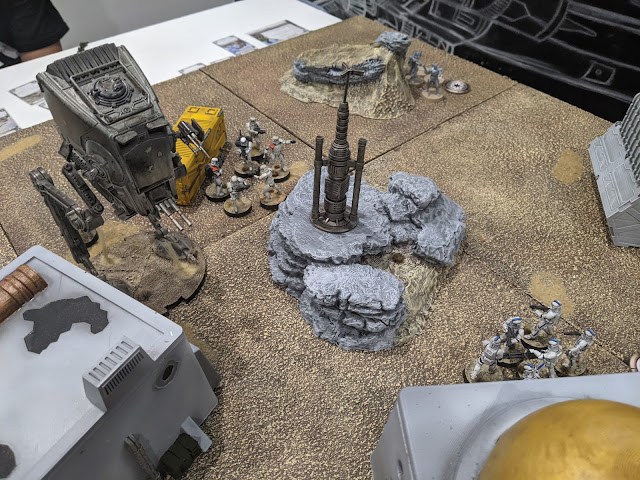 Turn 3
Take That Clankers! (3 pip) vs Coordinated Fire (3 pip)
Rex gets to work immediately putting 2 wounds onto the AT-ST. Seeing an opportunity the Stormtroopers rush into position pouring accurate fire into Rex stripping him down to a single wound! The ARC troopers continue to assault the walker for nil damage.
The second unit of Stormtroopers face the now exposed ARC troopers and reactionary fire drops 2 of their number. Clones fire onto the AT-ST determined to crack the machine but the armour proves too thick. The AT-ST splits fire in response onto the Clones and Captain Rex netting only suppression tokens.
The Strike team blanks out attacking Rex before the Phase 1's split fire of their own taking out the remaining sniper (+1 VP) and scoring damage onto the AT-ST.
General Veers drops a single ARC trooper. 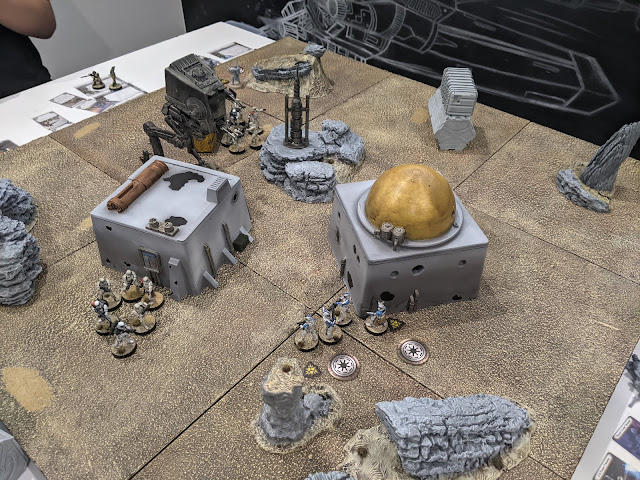 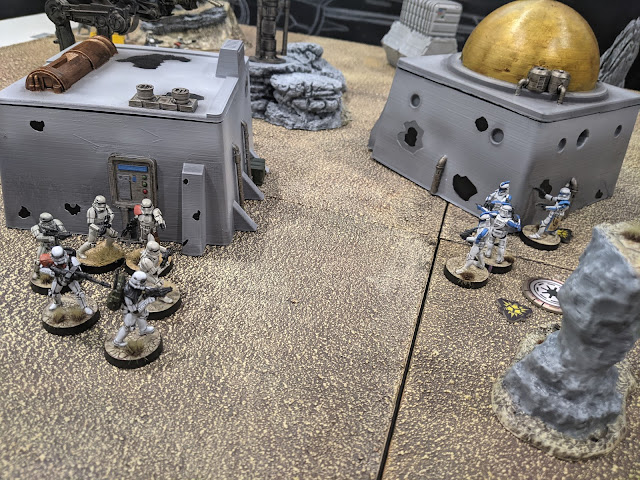 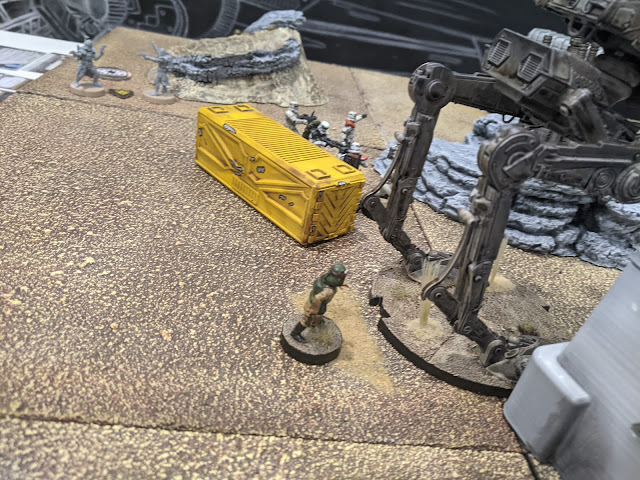 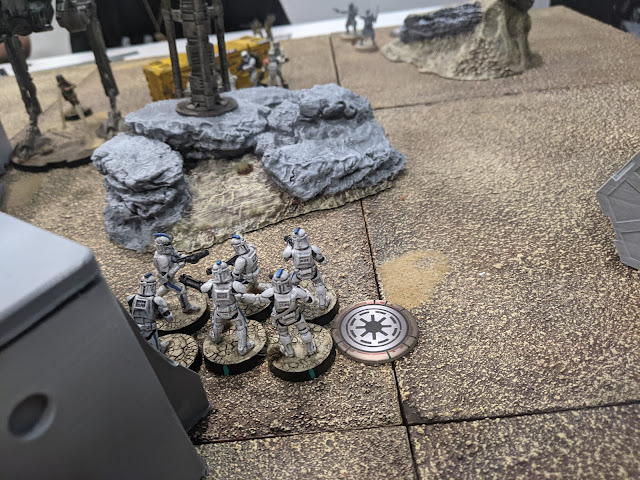 Turn 4
Ambush (1 pip) vs Maximum Firepower (1 pip)
GAR win the roll off for initiative. Rex moves behind the building for cover and takes a dodge token. In a stroke of genius Veers double moves away from the ARC troopers putting them at range 4 and kills another with an aerial barrage.
The Phase 1's rally before aiming and taking another point of damage onto the AT-ST and handing it a disabled token (Requires 2 actions to move). In reply the AT-ST drops 2 Clones after 6 hits and help from nearby Rex with a dodge token. Echo targets the war machine but can't find the chink in its armour whilst the Stormtroopers unleash fire power into the second unit of Phase 1's destroying the unit (+1 VP).
Finally Fives targets the rear of the AT-ST but once again can't find any soft spots.
GAR - 1 VP
Empire - 1 VP 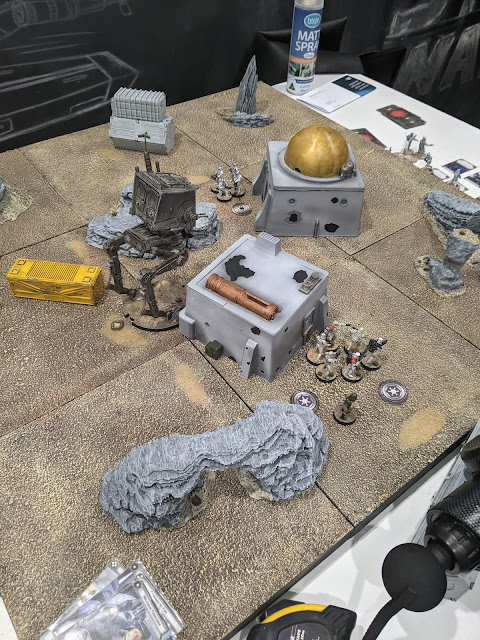 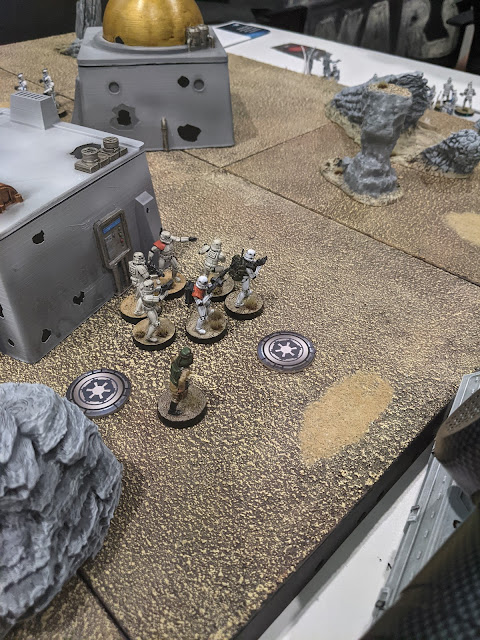 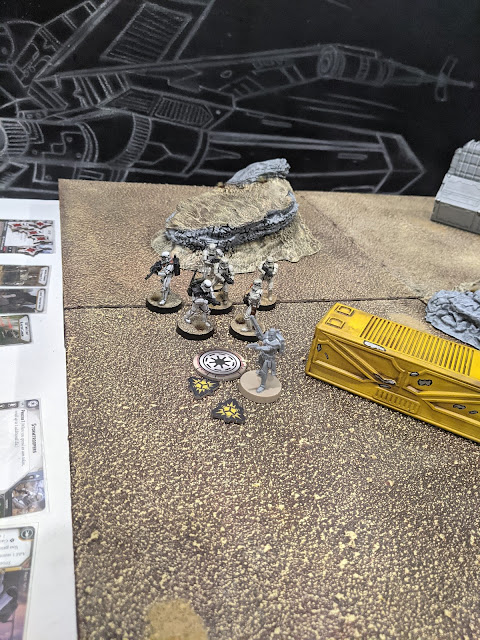 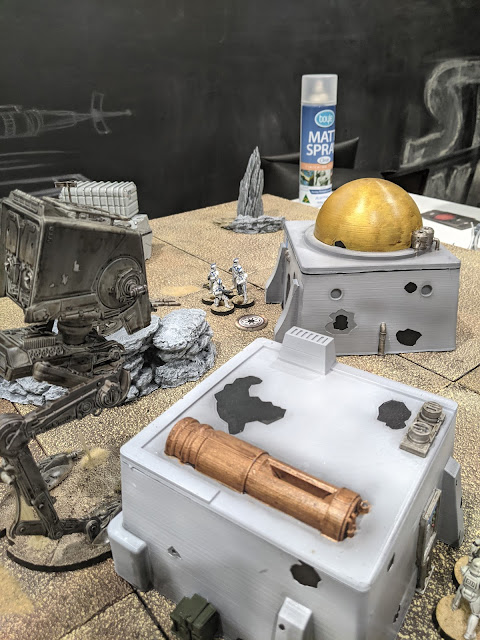 Turn 5
Call Me Captain (1 pip) vs Evasive Maneuvers (2 pip)
The final pivotal turn and the Phase 1's manage to put the nail in the coffin and destroy the AT-ST (+2 VP) which meant Aeson needed to destroy 2 units to tie the game or kill Captain Rex who was safely hidden away.
The Stormtroopers unload onto Fives who falls quickly (+1 VP) however the rest of the Clone army withdraw into cover and out of line of sight. The final unit of Stormtroopers have a shot onto Echo however the dice without the aid of any aim tokens abandon the Empire resulting in no damage.
Final Score
GAR - 3 Victory Points
Empire - 2 Victory Points
Result - GAR Victory
The Easter league scores currently stand as follows:
James (Rebels) - 3 points (1W/0D/0L)
Chrace (GAR) - 3 points (1W/0D/0L)
Aeson (Empire) - 1 point (0W/0D/1L)
Landon (Empire) - 1 point (0W/0D/1L)
Posted by Jimmy at 9:07 PM