Currently the score for the Easter league is as follows:

The next game put father and son against one another with Han Solo leading the Rebels against an AT-ST list with General Veers at the helm. It was going to be an uphill battle for the Rebels and they'd be relying on their courageous wit and sneaky tricks to get over the line. 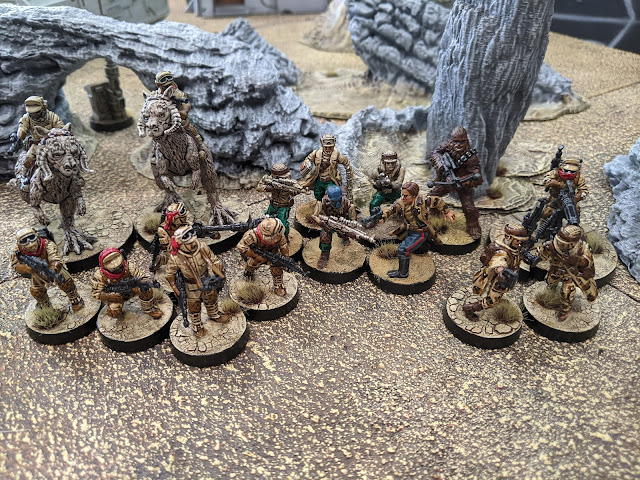 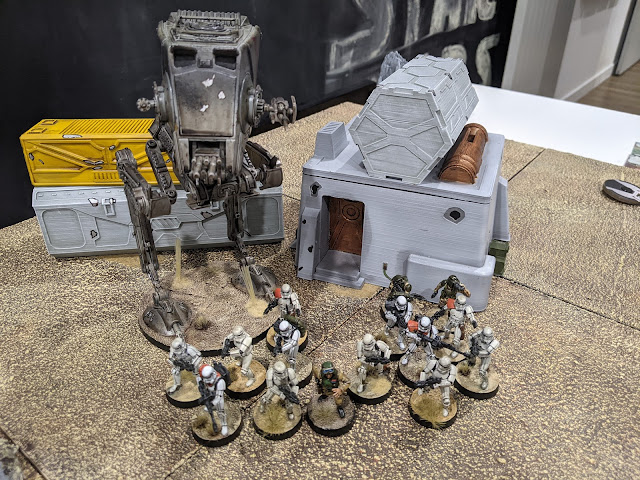 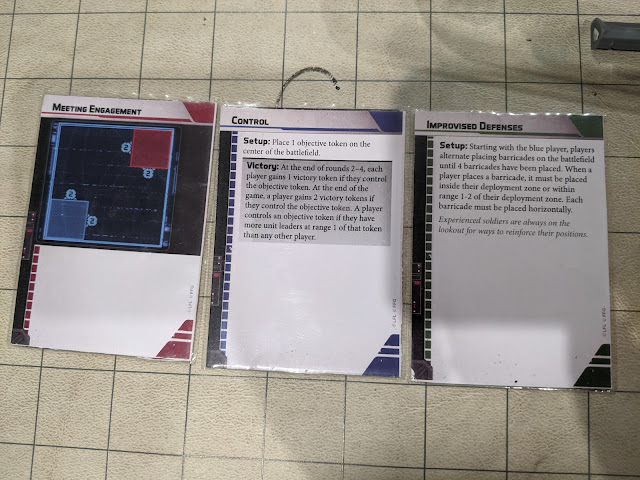 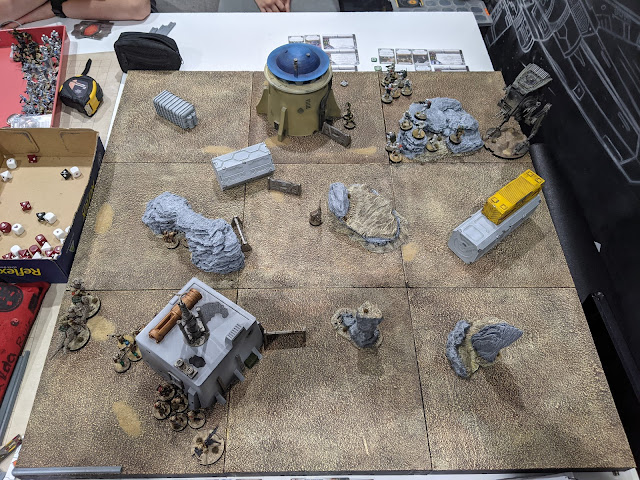 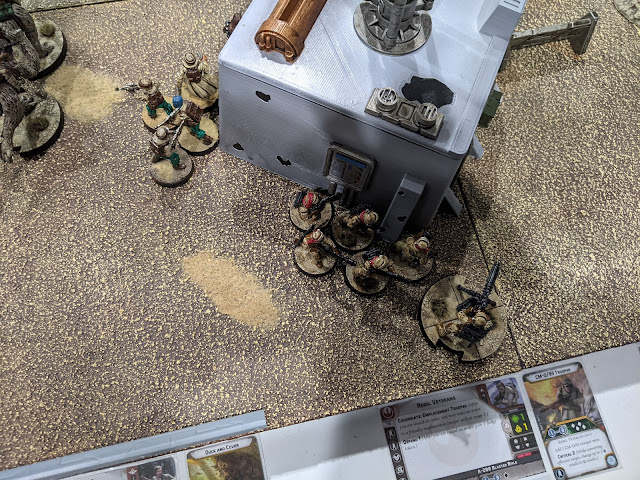 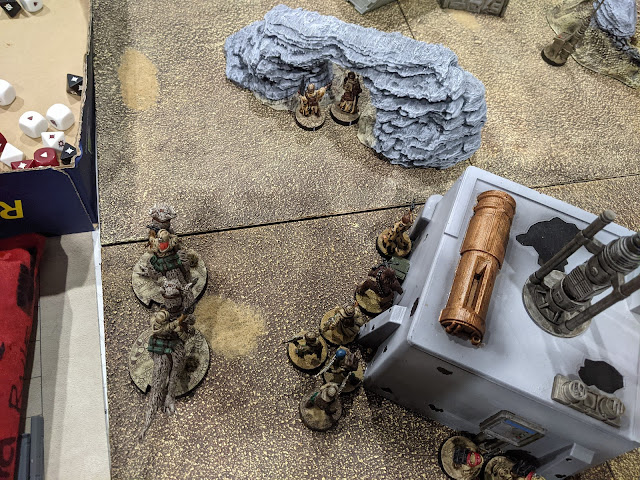 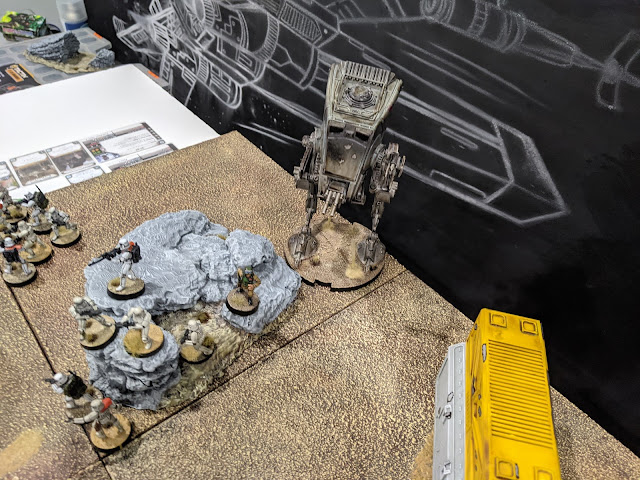 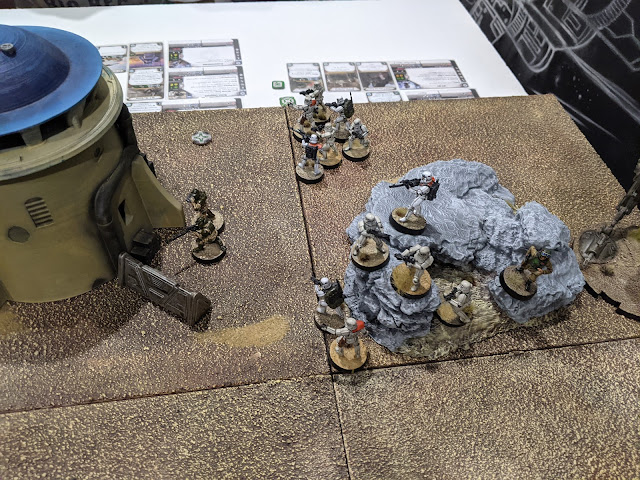 Turn 1 - Ambush (1 pip) vs Maximum Firepower (1 pip)
Commandos push up and drop a mine to cause a headache near the objective. Veers uses Spotter and passes out aim tokens onto the AT-ST, Veers and the Stormtroopers. Thanks to his command card he drops a orbital bomb onto the Mark II Blaster trooper leaving a crater.
Rebel Troopers take a dodge token and move into archway. Stormtroopers move opening up killing two of the Rebel Troopers. Han Solo moves up and returns the favour dropping a pair of Stormtroopers. The Strike team double moves. Chewbacca drops a single stormtrooper at range.
The AT-ST moves towards the centre and I detonate the bomb. It kills a single Stormtrooper, puts 2 wounds onto Chewie, drops a commando and puts a suppression token onto the Scout Strike team. The AT-ST targets and kills the remaining Commando removing my team in turn 1 for the second game in a row!
The Rebel Veterans open fire onto the Stormtroopers however it is only for a suppression token. The remaining Stormtroopers sneak around the back of the building before the Tauntauns double move up the flank staying at range 4 of the AT-ST dropping a Scout on the way past. 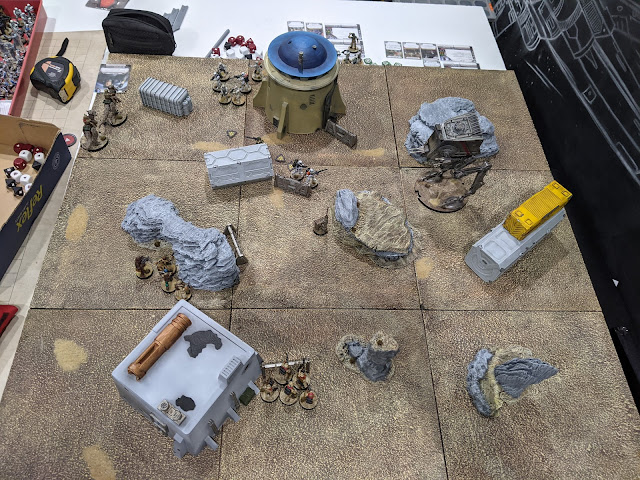 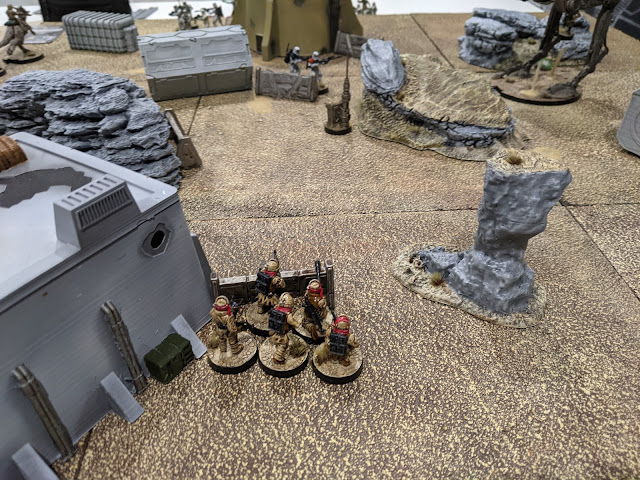 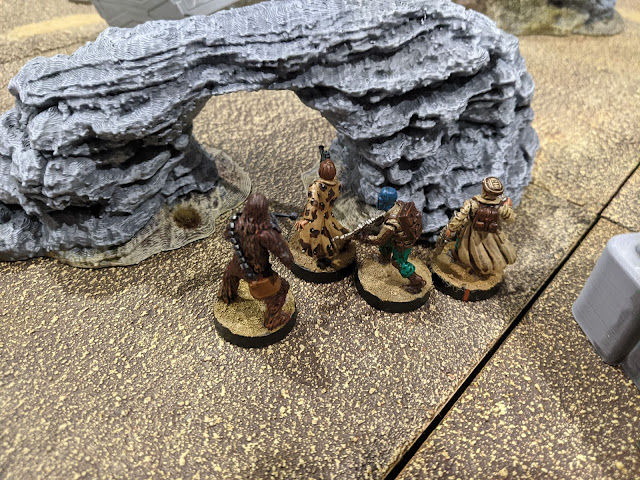 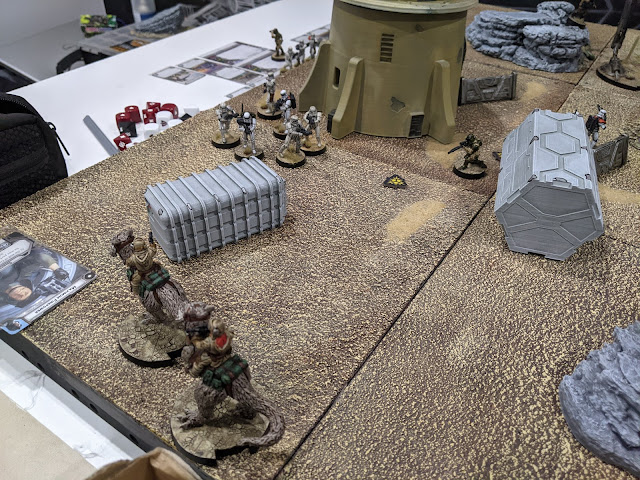 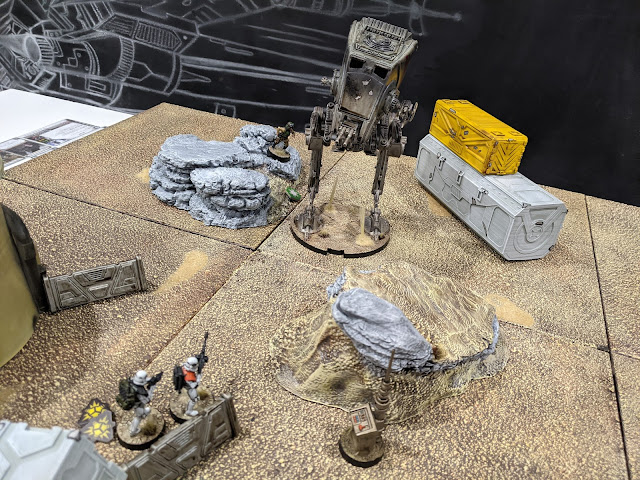 Turn 2 - Reckless Diversion (2 pips) vs Evasive Maneuvers (2 pip)
Faceup order tokens go down onto Han and the Tauns as well as the AT-ST.
Tauntauns take a move triggering relentless killing the last Scout Strike team member. They finish off charging into the Stormtroopers however that proves to be a mistake as the white armoured troops beat down a single rider. The Rebel Veterans hunt down the second unit of Stormtroopers in heavy cover killing a single model banking up enough suppression that they panic and run away towards the next barricade.
The Rebel Troopers double move to either support the Tauntaun next turn or get out of the way of the AT-ST. Veers inspires the nearby Stormtroopers and double moves into a position behind a small hill. Chewie moves and kills the lone Stormtrooper removing an activation whilst in response the AT-ST clambers up on top of the hill (I removed it from the table to save my model falling over....)and unloading onto the Rebel Veterans killing two of their number.
Han goes into action moving enough to spot Veers and puts two wounds onto him and a single blaster bolt penetrates the thick armour of the Imperial war machine. With Veers and the AT-ST near the objective they secure it for the round giving them a victory point. 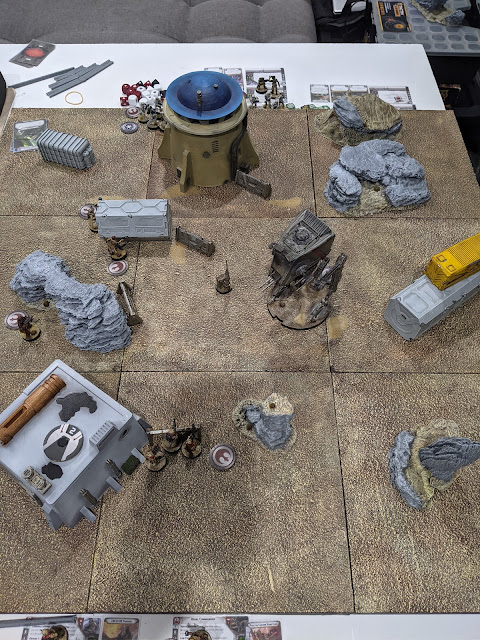 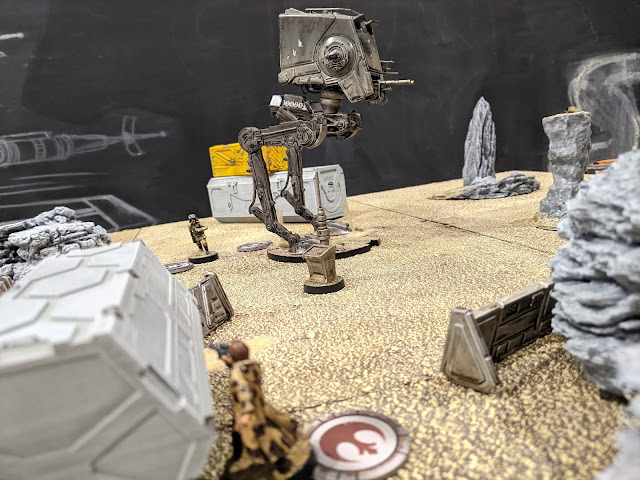 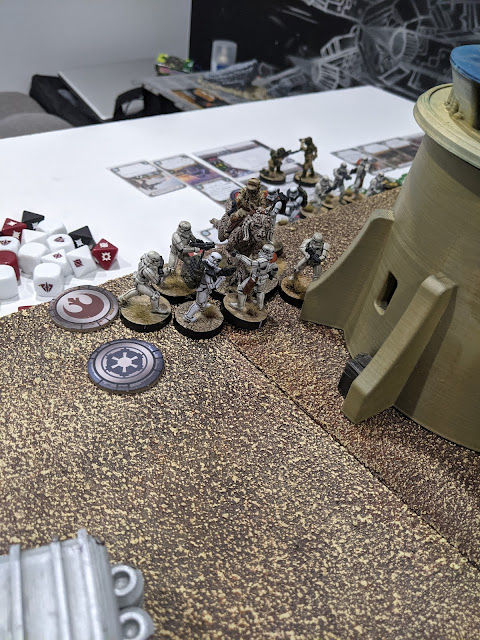 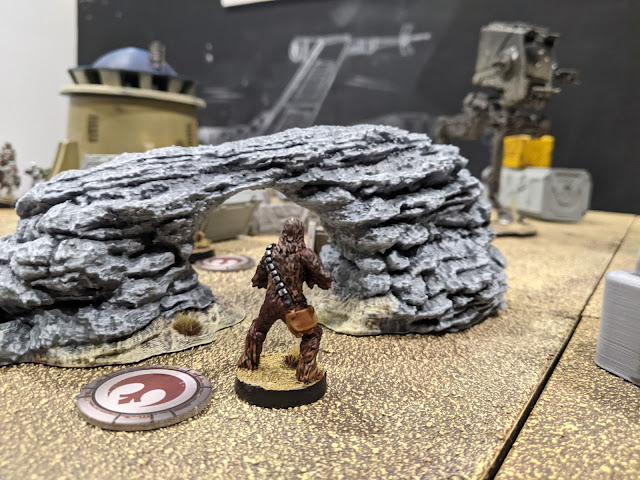 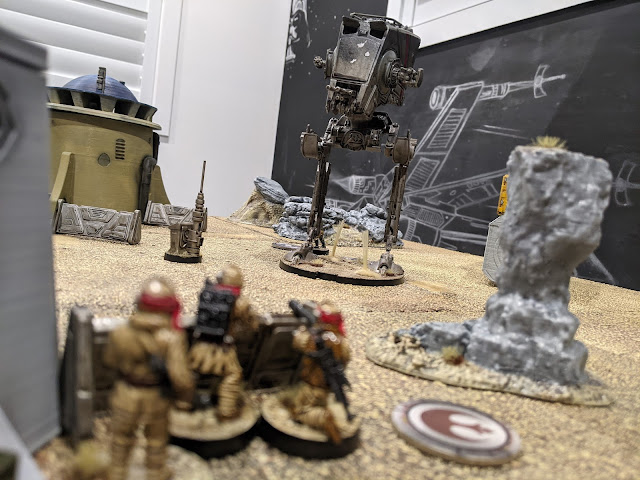 Turn 3 - Change of Plans (3 pip) vs Coordinated Fire (3 pip)
Han, Chewie and the Rebel Veterans take order tokens whilst the Stormtroopers take an order token for the Empire. They activate immediately taking a dodge token and putting a further two wounds onto the remaining Tauntaun rider.
The Rebel Veterans move into a flanking position and fire at the AT-ST but yield no damage. The walker turns and fires back at the unit but alongside cover, a dodge token and 3 block results they're left standing. Chewie moves into a firing position and puts a single wound onto General Veers leaving him on two remaining and in response he takes a dodge action and puts a wound onto Han Solo.
The lone Tauntaun rider withdraws triggering relentless however the Stormtroopers save all damage and spend their dodge in the process. The Rebel Troopers fire onto General Veers in order to have him spend the dodge token clearing the way for Solo's pistol shot allowing him to kill General Veers.
The Empire was down to a pair of activations only but the Rebels had very thin numbers. 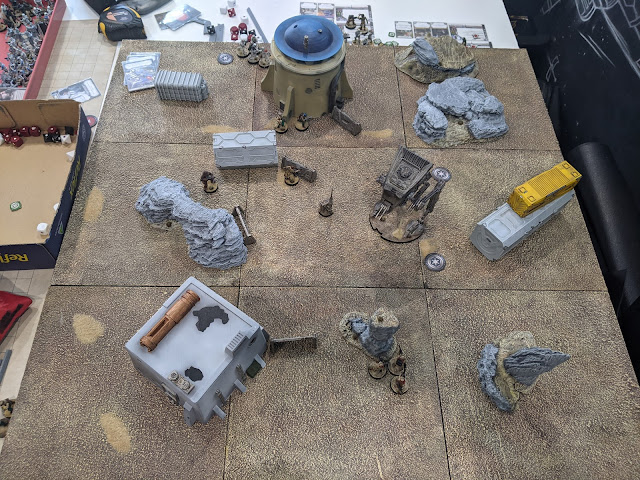 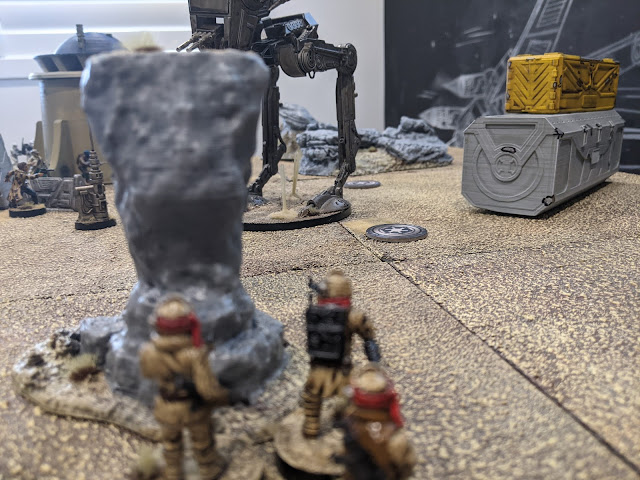 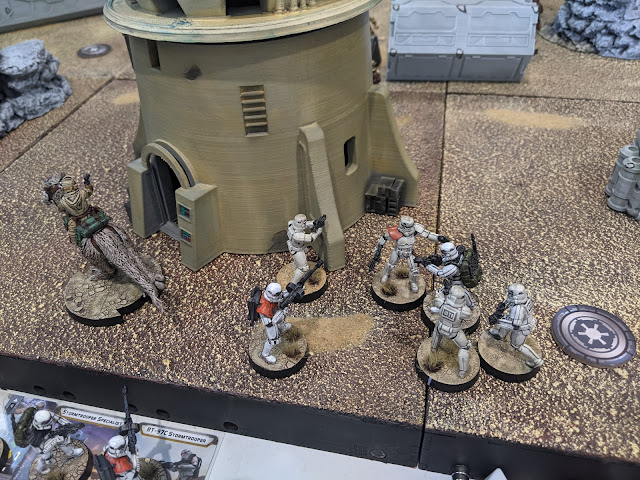 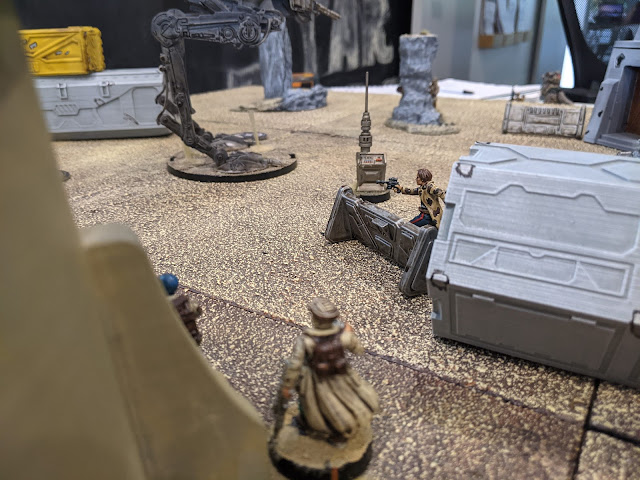 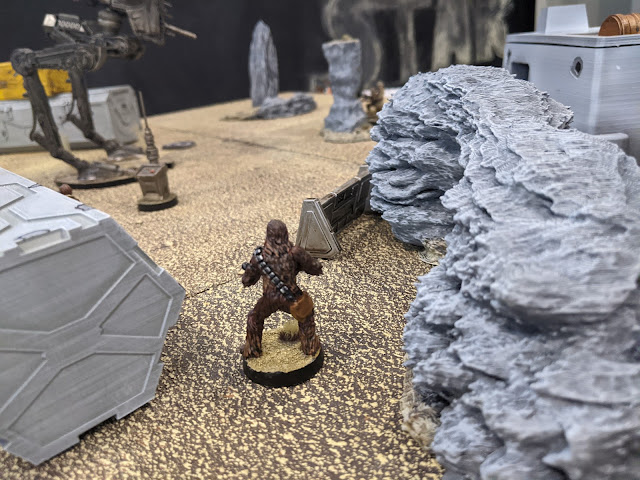 Turn 4 - Push (2 pip) vs Standing Orders (4 pip)
The lone Tauntaun and the Rebel Veterans take the faceup order tokens whilst the AT-ST takes one for the Empire. The Taun immediately moves around to the back of the AT-ST staying in range 1 of the objective but doing no damage. The AT-ST  splits fire  onto Han and Chewie resulting in 3 wounds on Chewie between Guardian and Uncanny Luck.
Solo fails to rally however putting him at a single action and takes a dodge token to trigger teamwork not wanting the Stormtroopers to make short work of Chewbacca. The Stormtroopers move up and shoot the Wookie for 2 wounds which will and truly triggers the charge rule. Chewie activates charging only killing a pair of troopers however.
The Rebel troopers rush into aid their comrade dropping another Stormtrooper. Finally the Rebel Veterans seizing the moment rush to get behind the AT-ST in order to secure the objective on the final round. 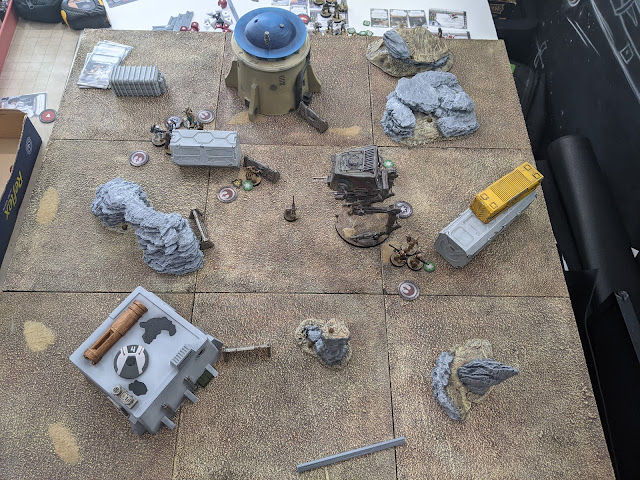 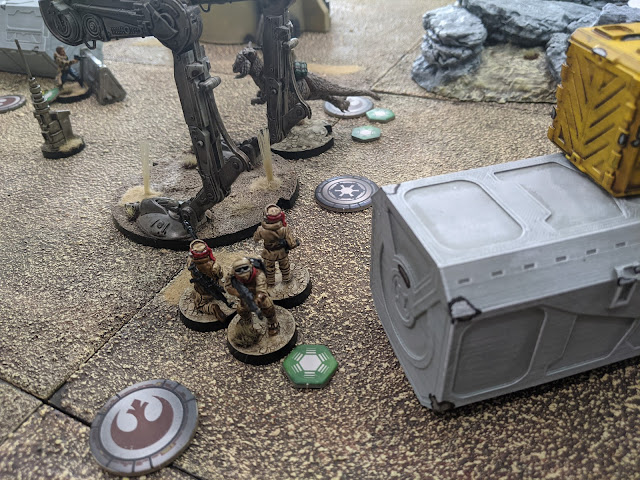 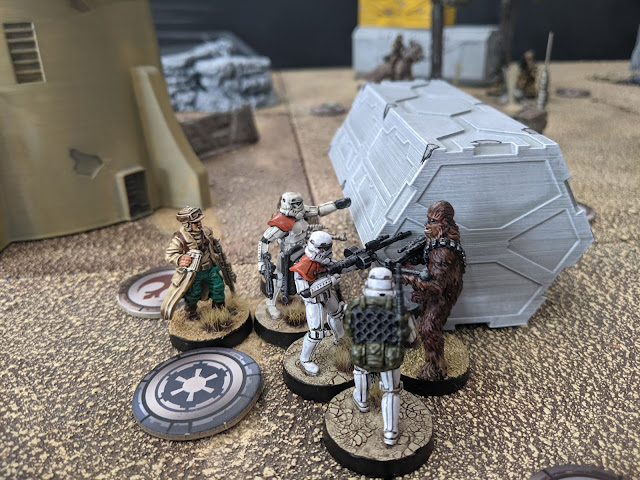 Turn 5 - Sorry About The Mess (0 pip) vs Pinned Down (2 pips)
Han and the AT-ST take faceup order tokens. The Rebel Troopers aim and belt the Stormtroopers killing another model whilst they focus onto the Wookie for no damage thanks to Han's shared dodge token.
The Rebel Veterans double move into range 1 of the objective placing enemies on all sides of the AT-ST. The Empire's final activation sees it fire onto Han putting 2 wounds on the General of the Rebel Alliance. Chewie kills the rest of the Stormtroopers whilst the rest of the fire from Han and the Tauntaun goes into the AT-ST for minimal damage.
The Rebel Alliance secure the objective for 2 points in the fifth round. 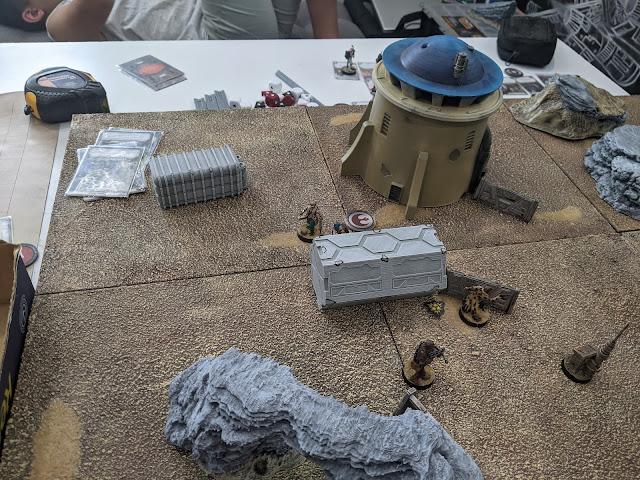 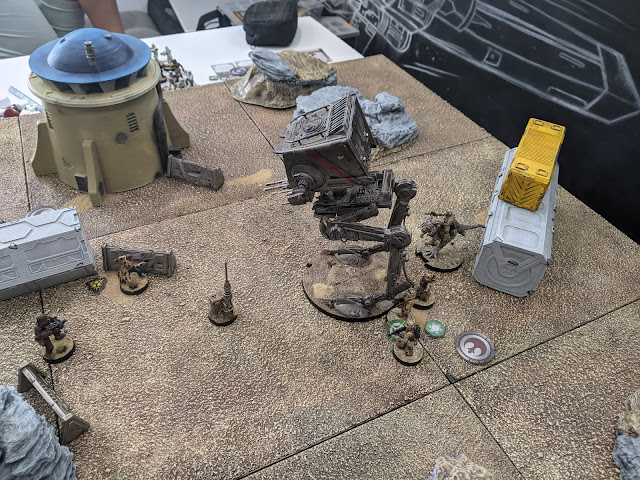 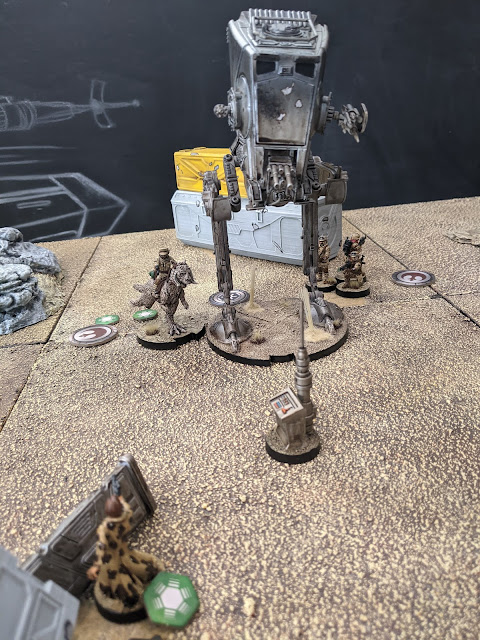 Result - Rebel Victory
Conclusion:
Firstly I want to say that my 10 year old played like an absolute champion. I initially thought I had a very slim chance of victory in this game simply because of the armoured monstrosity. He played extremely well and it was one of the best games of Legion I've had in a long time with super swingy rolls and the whole narrative just seemed to fit right into a Star Wars movie with a small group of Rebels grasping victory at the final minute.
Even though Aeson has lost his two games I'm really keen to see how his third goes as I had a good discussion with him about keeping his Stormtroopers behind his AT-ST for cover, as well as keeping them all within the 'Veers-sphere' for the continued Spotter aims.
I still suck using the Rebel Commandos and perhaps I need to keep them back and use them late game but then I think that isn't effective play as I'm more likely to hit my own troops then.
That completes the second round of the Easter League. Thanks for reading.